Home / News / Why Are Flags At Half Staff Today? 2022 Half Staff Calendar

It is customary in the United States to fly the American flag at half-staff (or half-mast) to honor service members who have died while serving our country.

If you are wondering why many flags are at half staff everywhere in the U.S. today — right now you might forget an important day in the country or an order from the country leader. These days are when the nation or a specific state is mourning. That is why, also, it’s important to take note of them and learn the U.S. flag etiquette.

Have a look at this Half-staff Calendar for 2022 to know what the half-staff days are.

When & Why Are Flags At Half Staff?

Flying the flag at half-mast follows some rules and guidelines provided by the U.S. Flag Code. In terms of when to perform it, there are specific mourning days as shown on the calendar above and particular orders promulgated by the President or State Governor.

The day is observed in the middle of May, during Police Week, to honor and remember federal, state, and local peace officers. In the line of duty, these individuals have made sacrifices or have been disabled. That’s when the flag is lowered to half-staff for the entire day, from sunrise to sunset.

Memorial Day happens on the last Monday of May when you lower the flag to half staff until 12 o’clock. Then it must be raised at full staff for the duration of the day.

This day is commemorated to honor all fallen service members in the United States military.

As regards this day, VETADN offers various options of Memorial Day flags you can choose from. Whether you plan to honor deceased veterans, firefighters, or a person who served in the U.S. military — there must be at least one option you’ll love from the collection.

Patriot Day is observed to remember the most tragic terrorist event at the World Trade Center in NYC on Sep 11, 2001. The event took away lots of lives from the civilians and the heroes who fought against it to save others. So on that same day every year, the American flag is flown at half-staff from sunrise to sunset.

With this in mind, the 9/11 Never Forget flags were created by VETADN to remember the victims and soldiers who died from that event.

This day occurs on the first Sunday of October to honor all firefighters who died in the line of duty. The day is actually the start of Fire Prevention Week as well. It is considered that folks can fly their U.S. flags at half staff on an entire day and during the week following it.

This day is commemorated every year on December 7 in the U.S. to remember the 2,403 American people killed in the Japanese surprise attack on Pearl Harbor in Hawaii on December 7, 1941. The day also marked the start of an American war against Japan and World War II.

For such a significant impact that changed everything, the American flags must be lowered to half staff from sunrise to sunset to remember the unforgettable event.

In addition to all the days above, American folks also make flags half staff upon the death of the President, a Vice President, Chief Justice of the Supreme Court, and Speaker of the House.

Also, the President can declare an order of flying flags at half staff for a proclamation, a national tragedy, or the death of someone significant to the country.

Besides the President, Governors are also empowered to authorize the flying of flags at half-mast in their States. It is for the death of a government official or a military person on active duty. 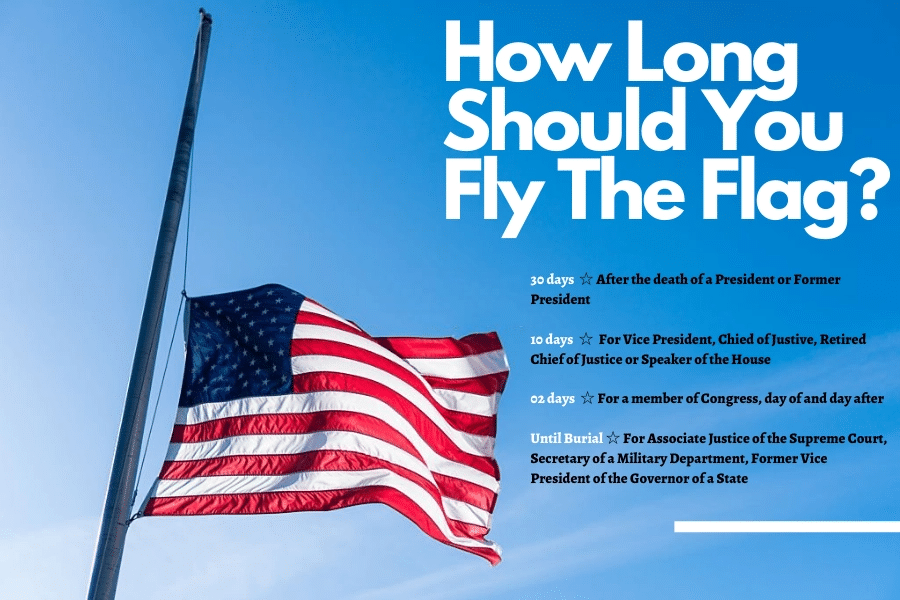 Are Flags Allowed To Fly At Half Staff All Year Round?

It is a beautiful intention to honor our fallen service members all year round — so YES — you can absolutely fly your flag at half-staff continuously from Jan to Dec.

Also, there is no rule shown in the U.S. Flag Code that the American flag is not allowed to fly at half-staff during a full year.

However, be aware that our nation has other important days when folks fly flags at full staff to celebrate as well. They include the Birthday of Martin Luther King Jr. (the third Monday in January), Independence Day (4th of July), Labor Day (the first Monday of September), etc.

These days are Celebration Days, which means they are not for mourning or commemorations. Nevertheless, while you celebrate them, you also recognize the sacrifice of those who laid their lives down for the country. Their death is not for nothing.

How To Fly The Flag At Half Staff Properly

First, it should be hoisted to the peak of the flagpole. Then lower it down at a slower speed to the half mid-way position.

If there is any other 3×5 flag flying together with the American flag, make sure you display them under the American flag. According to the U.S. Flag Code, no other flag (nor state flags or military flags) should be placed above the Old Glory or on its own right side facing the audience.

Ensure the correct length of time for the half-staff status. Consider the durations for the official days we point out in the Half-Staff Calendar above. Besides, if it is an order from the President or your State Governor, make sure you would know when the flag must be flown at half-staff from the promulgation.

Why are flags at half staff in the United States?

There are five official days when the American flag must be flown at half-staff to commemorate the fallen military members. They are:

Also, American folks are obliged to fly flags at half-mast under the order issued by the President or the State Governor.

Flying the U.S. flag must follow strictly the U.S. Flag Code’s guidelines. But first, you would want to know what are the durations in the day when the flags fly at half staff. So be alert by keeping an eye on our Half-Staff Calendar!

Thank you. Hope you have a great day!