Memorial Day happens at the end of May but it’s a tradition among folks to observe it the whole month with military flags. If you are looking for a memorial flag to decorate your home, office, or school in May 2022 — take this review as your flag guide.

Yes. Below are the 8 best-selling military flags (made by VETADN) to show your respect and pride toward the service members who died in their line of duty. Besides, you’ll also have a chance to learn more about the military branches through this post. 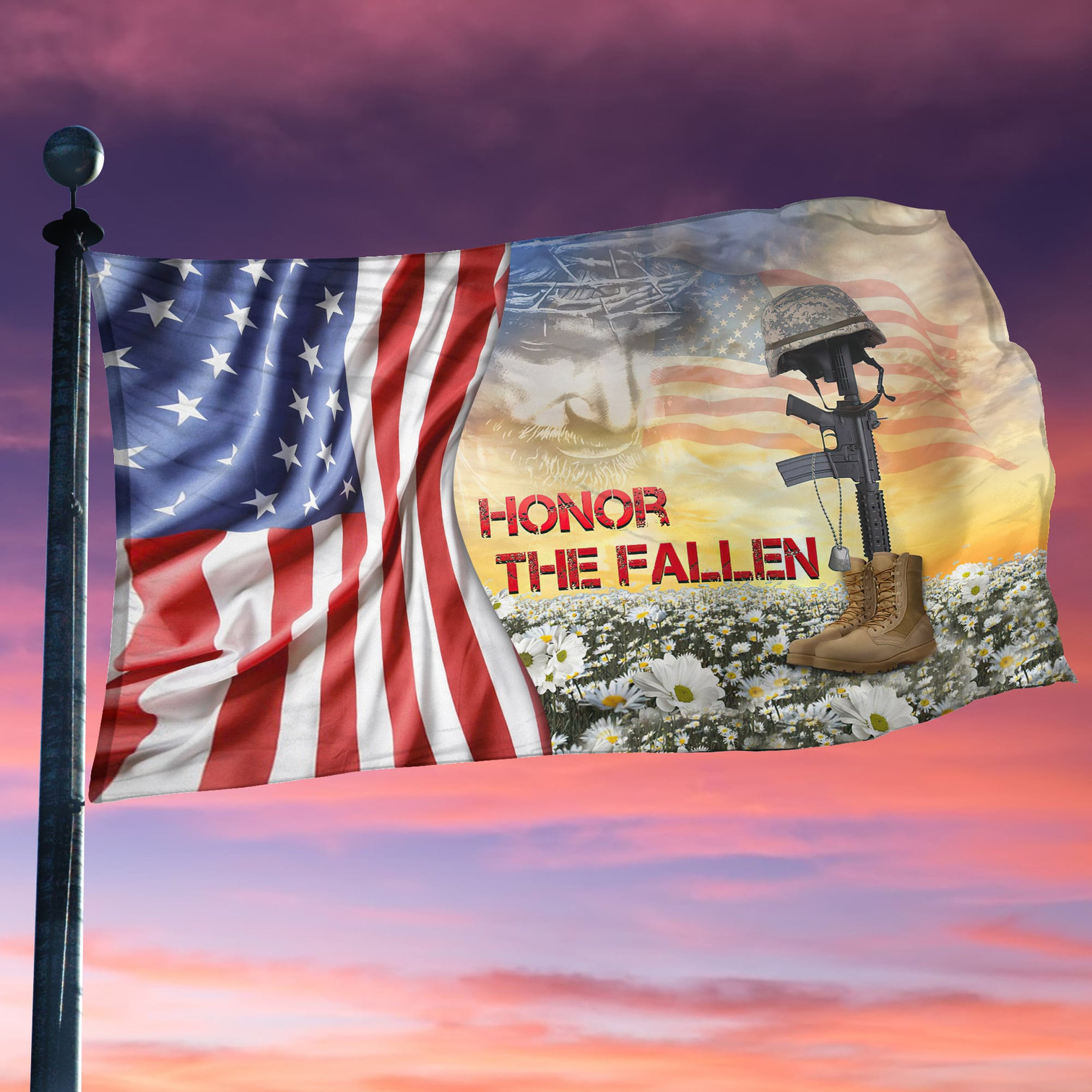 It goes without saying that the Christian faith is ingrained in most people of America, including many who served in the military. That’s what also inspires VETADN to come up with the idea of creating this design. 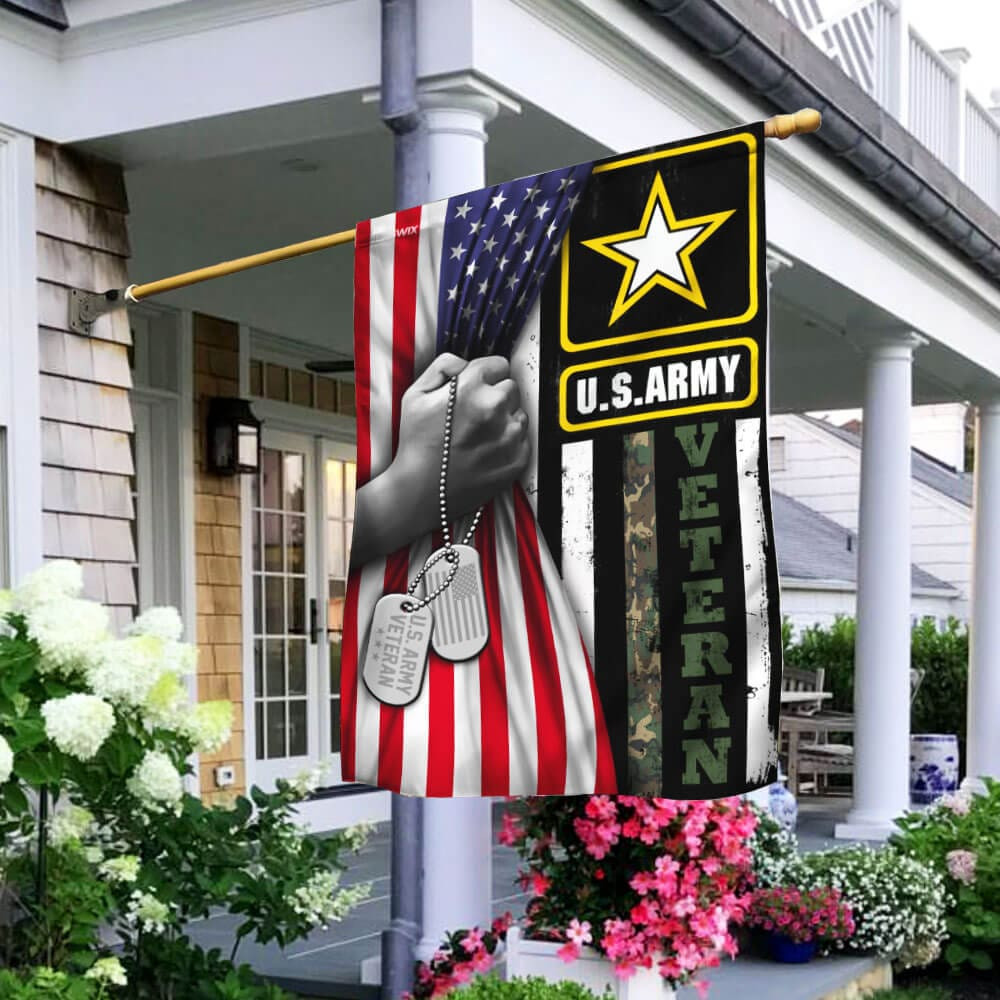 The flag’s olive green color with camo pattern is eye-catching while still retaining the Memorial Day spirit. To remind the public of which service branch you are honoring, the Army Star logo is absolutely needed. The flag also shows your appreciation in both May and November because of its message (for Veterans Day).

This is a house flag with an approximate size of 29.5” x 39.5”. It should attach perfectly to any flagstaff with just quick and easy installation. You can hang it on a porch, a patio, or a tree branch in the yard. Without a flagstaff, it would look beautiful on the wall.

If you want something more prominent to fly proudly on the vertical flagpole, you should consider this option. The flag comes with grommets in order for you to mount it into the halyard. It is made with an additional goal to fly at half-staff in the mourning moments.

In terms of design,  incorporates a well-known Army statement into this design to paint a picture of what message you want to spread. If you are in the US Army, you’ll know they say “This we’ll defend” as an official pledge. And the message is no doubt about the Army’s mission of protecting the United States and its civilians. 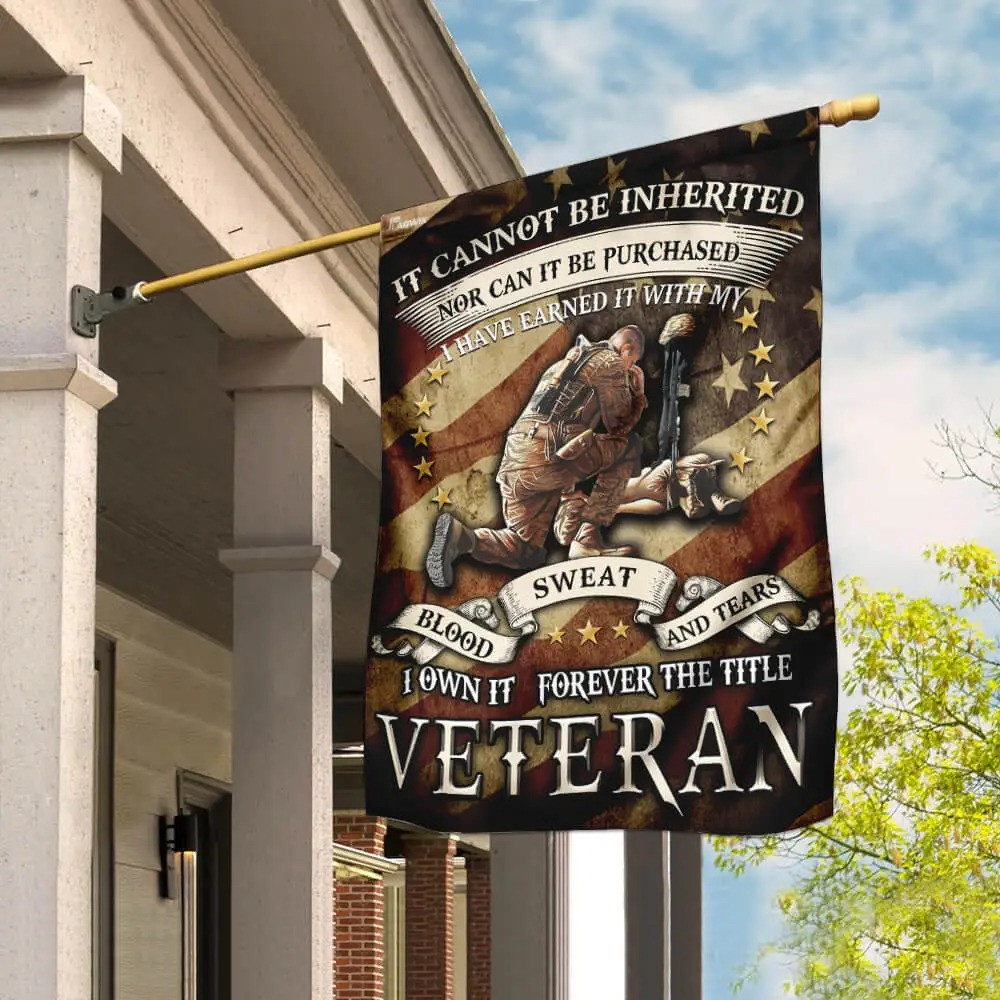 If you have lost a family member who served in the military, this flag is a fitting tribute. It is beautiful how it pays homage to the deceased with quotes and images that remind us of their service. Yes — the nation’s peace and stability have been exchanged with blood, sweat, and tears. 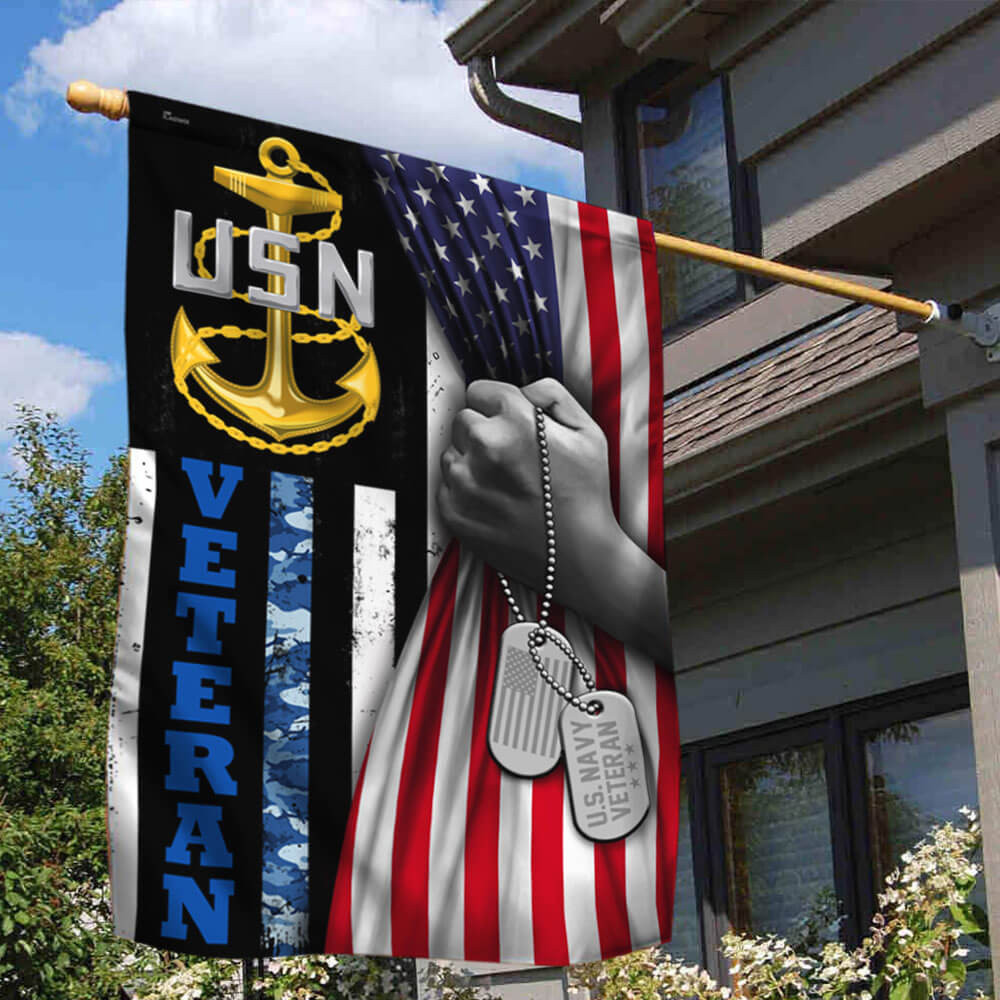 Memorial Day honors all service members who died in the line of duty or due to old age. However, it is not prohibited to honor members of only one military branch.

If you’ve lost someone who served in the United States Navy, this flag is designed to express your personal feelings.

The design is straightforward, with the US Navy logo prominently displayed in the flag’s center. In fact, the sapphire blue color with camo patterns on the backdrop immediately conjures up images of Navy soldiers. 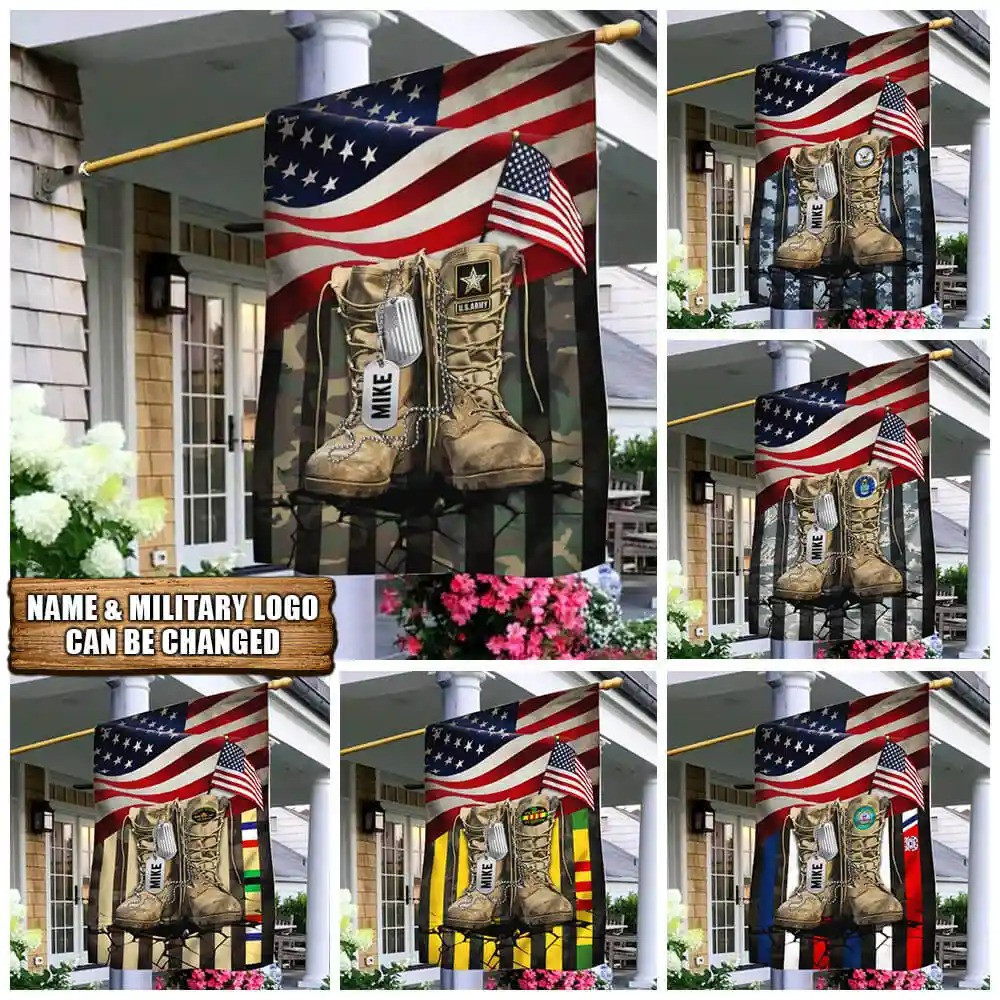 This item can be personalized with a military branch logo and a relevant theme based on your needs. VETADN can also put on it with the name of your veteran. Whether that veteran served in the United States Army, Navy, Air Force, Coast Guard, or even the Vietnam War, this flag can come out with the right theme.

The best part about our personalization service is that it is entirely free. In other words, if you’ve ever found a personalized item in our store, don’t worry about any additional fees because there aren’t any. At VETADN, we encourage differences — so we make sure that our customers pay nothing for anything other than their basic needs. 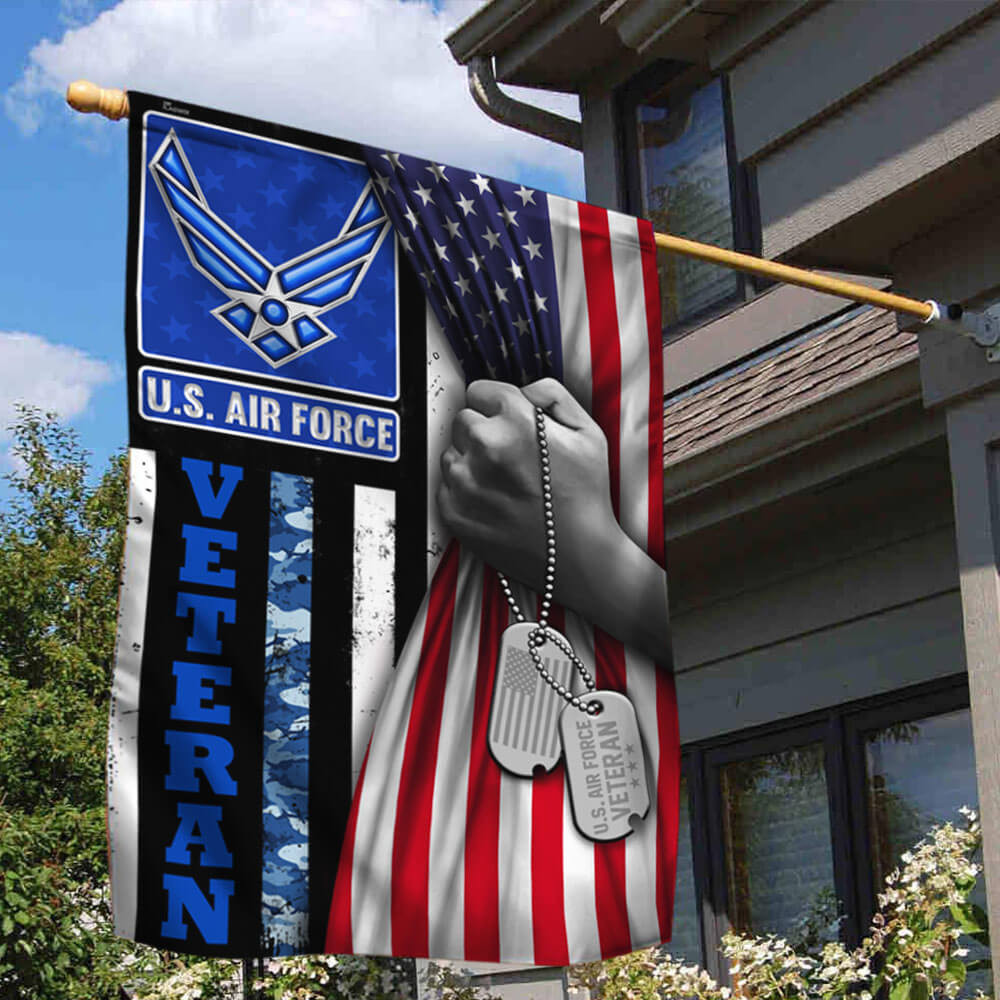 VETADN provides this flag to honor and remember the soldiers who died on the battlefields of the air. The clear image of a bald eagle flapping its wings says a lot about the strength and courage of our Air Force members.

It depicts what they did for the country as air fighters! Additionally, that spirit inspires VETADN to incorporate a well-known slogan of this branch into the design — “Fly, Fight, Win.” 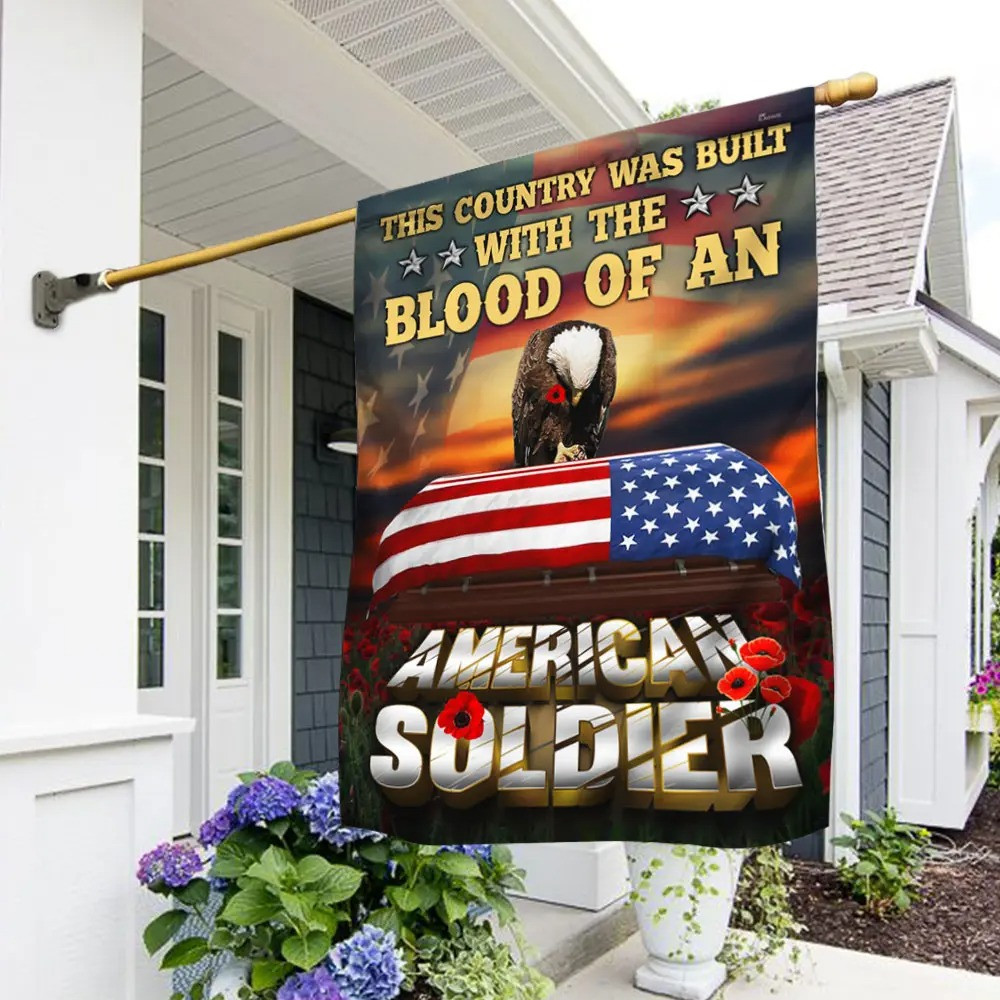 Because of its clear statement and visual art, this commemorative flag perfectly captures the spirit of Memorial Day.

We like to think of May as a month dedicated to remembering fallen soldiers. They must be the most courageous to sign a contract to head toward those battlefields. But they must also be the toughest to save their brothers and sisters’ lives in the line of duty.

If you are looking for not just a military branch flag but instead — a sentimental piece of hanging — we recommend this flag. In the size of 3×5 ft., the flag is expected to be flown on a vertical flagpole. 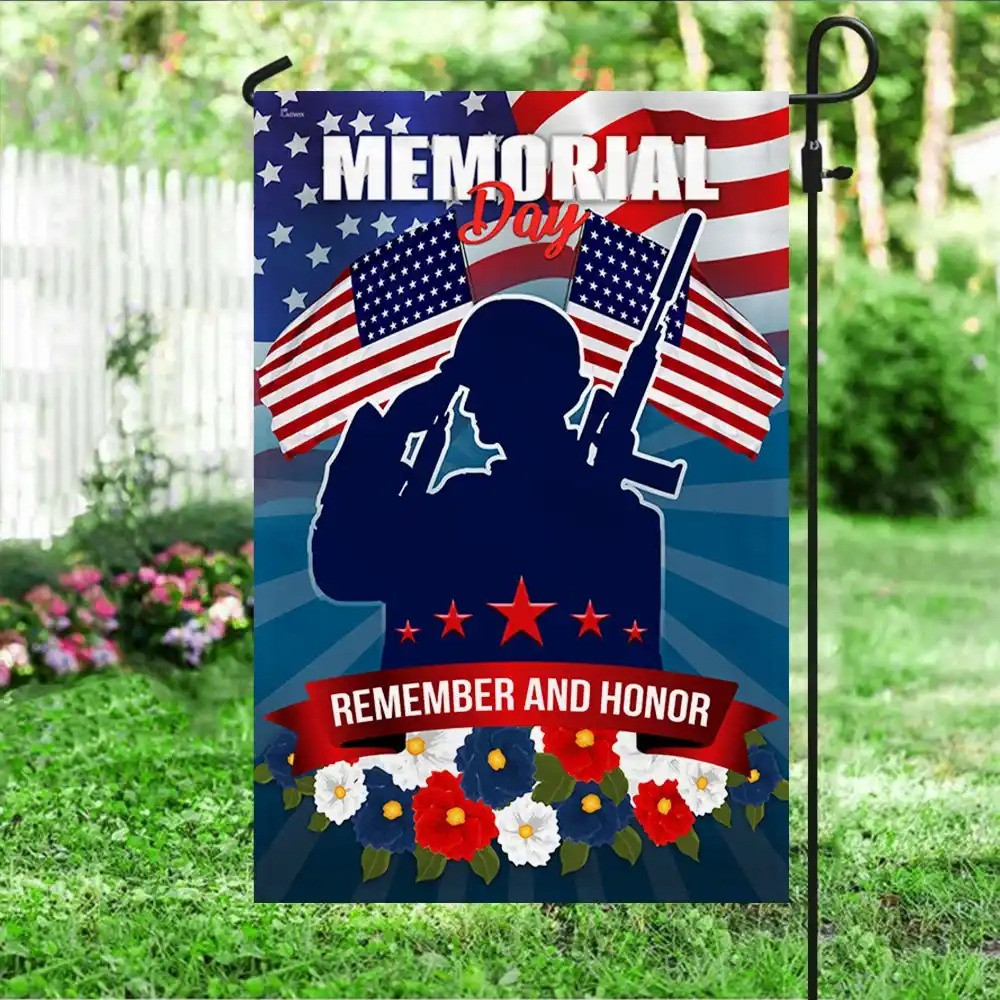 On Memorial Day, this flag with a cartoonish design is ideal for those looking for a lovely piece of art decor! Even if it’s already May, it’s never too early to fly such a flag.

When you hang a flag outside, you don’t just want to decorate the house or serve the ordinary purpose of an occasion. You also want to let people know that it’s time to focus on what the day has in store for them.

This flag is how you get the word out.

How To Display A Military Flag

Flying flags is a significant issue in the United States. So there are some fundamental rules you must follow when it comes to that.

There are more rules to follow in the US Flag Code, but above are the most important things to take note of.

Tagsmemorialdayusmilitaryflagusarmyusnavyusmarinesusairforceveteranusveteranvetadn
PreviousProudvet365 - R.E.D Shirt: What is R.E.D Day and why do we wear RED?
NextHow to choose the right decorative Veteran Flag