How To Hang A Flag On A Wall Easily And Properly

Hanging a flag on the wall in your area as the indoor decor demonstrates your appreciation for everything associated with it. However, not everyone knows how to hang a flag on a wall properly. The appropriateness of how it is hung is determined by the concept it represents.

Indeed, if it is an American flag, you must comply the rules outlined in the United States Flag Code to display flags legally and appealingly. Besides, whether you want to hang other types of flag, we got some helpful tips for you in this article.

The first custom rule when you want to display a flag on a wall in a right way is always the most important to follow. Make sure to put the union on the upper left corner of the indoor American flag, as you face it, either vertically or horizontally. In case you don’t know, the union we mentioned formerly is the area of white stars. The meaning of the stars is that these 50 stars represent the constellation of 50 states in the U.S. Therefore, the union means too great to be put down to the bottom. 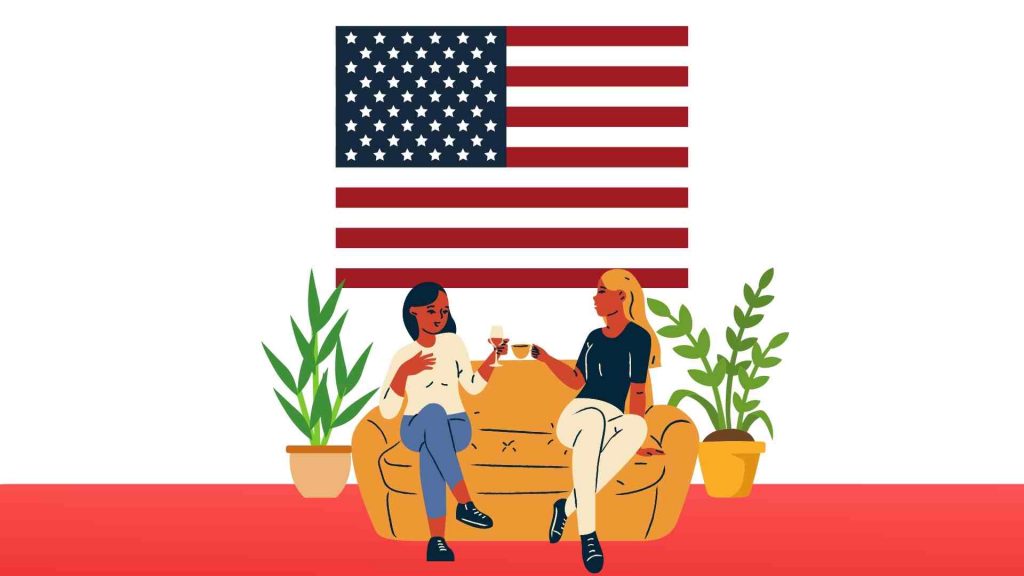 Second, never allow the it to touch the ground, floor, or get dipped into the water. Needless to say, it should be positioned in a high place of prominence in order to show your respect. Don’t worry. We’ll guide you how to hang it securely in the next section below so it couldn’t have a chance to fall to the ground.

One more thing to notice is not to hang any larger banners beside it. State flags and international ones should also be positioned to its own right as the observers’ view. Additionally, it must be on top of all flags you may also hang together on the wall. The act of displaying it beneath the other ones is considered utterly irreverent. 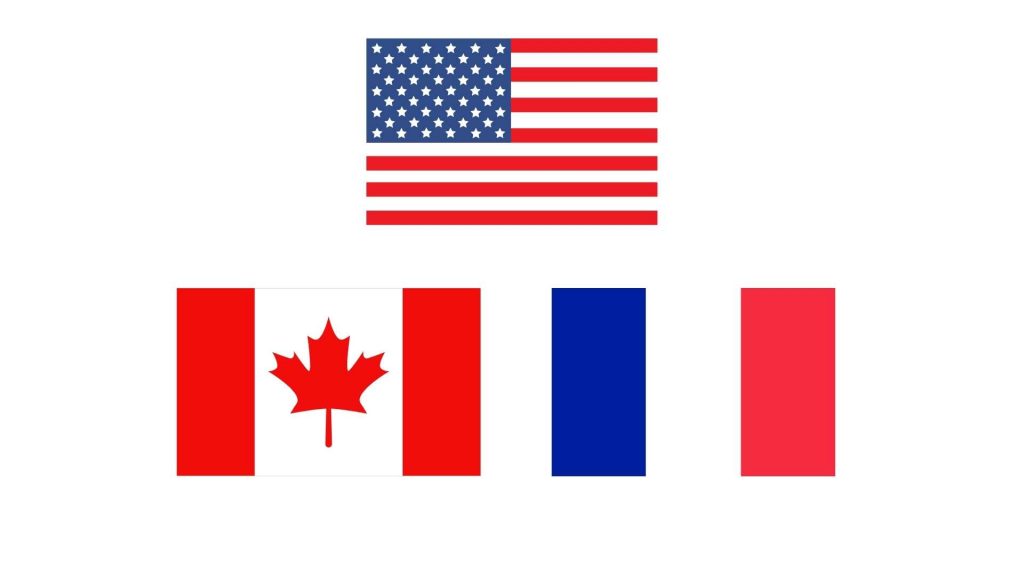 When displaying it on the wall, the eaves, or any area at your house, ensure not to keep it in darkness. Accordingly, either we take it down before sunset, or we illuminate it to continue the displaying at night.

Finally, do not forget to keep it outstretched against the surface on the wall. It shouldn’t ever shrink or get wrinkled as a prominent decorative piece.

Hanging The Flag In A Fixed Manner

In a fixed manner, flags that come with grommets are those options that will leave no damage on the fabric. Keep yours securely hung on the wall by using the grommets available on the side nearest the union part. Then, put some pushpins or nails into the grommets. This way is only applicable to vertical displaying because the grommets are often set to fly a flag from a flagpole.

You could use more than one pushpin to put into each grommet to hang it more firmly on the wall. It’s all up to you. However, avoid placing those pins into the stitching at its edges. 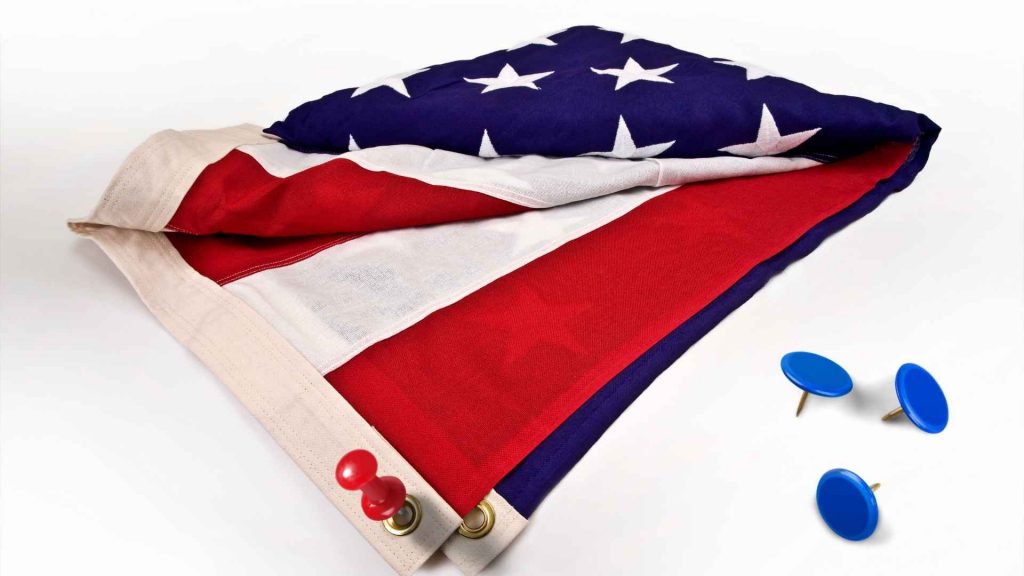 If you want to hang it horizontally, in like manner, use pushpins. But, there would be only one side that has the grommets. That’s when you must place pushpins on the other side without any grommet to pierce. Remember not to use nails to pierce the fabric itself, because that might cause disrespect and damage to it. 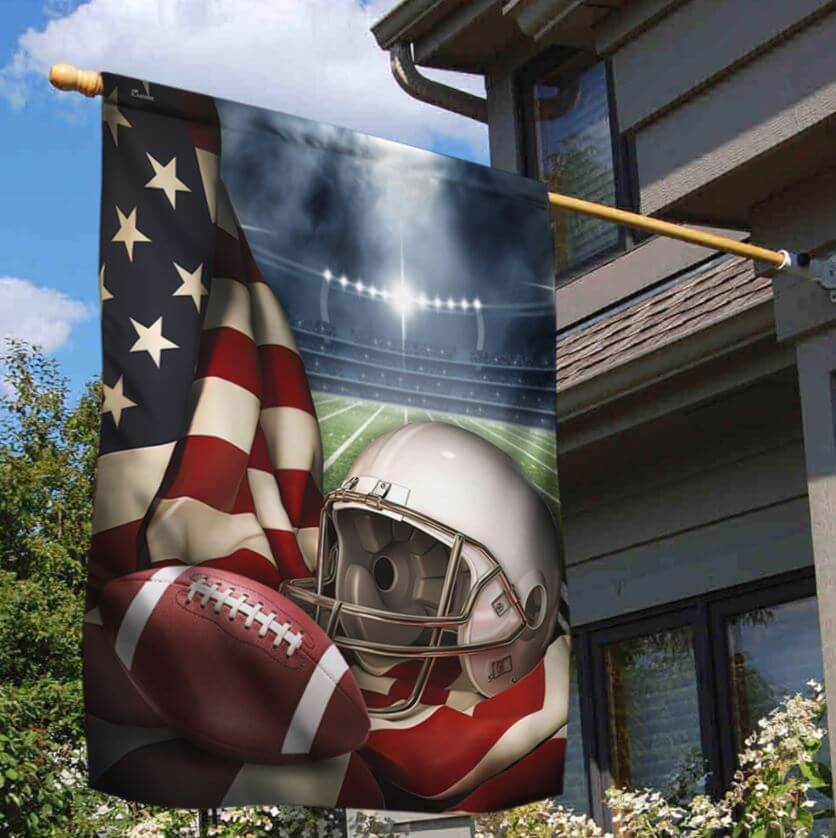 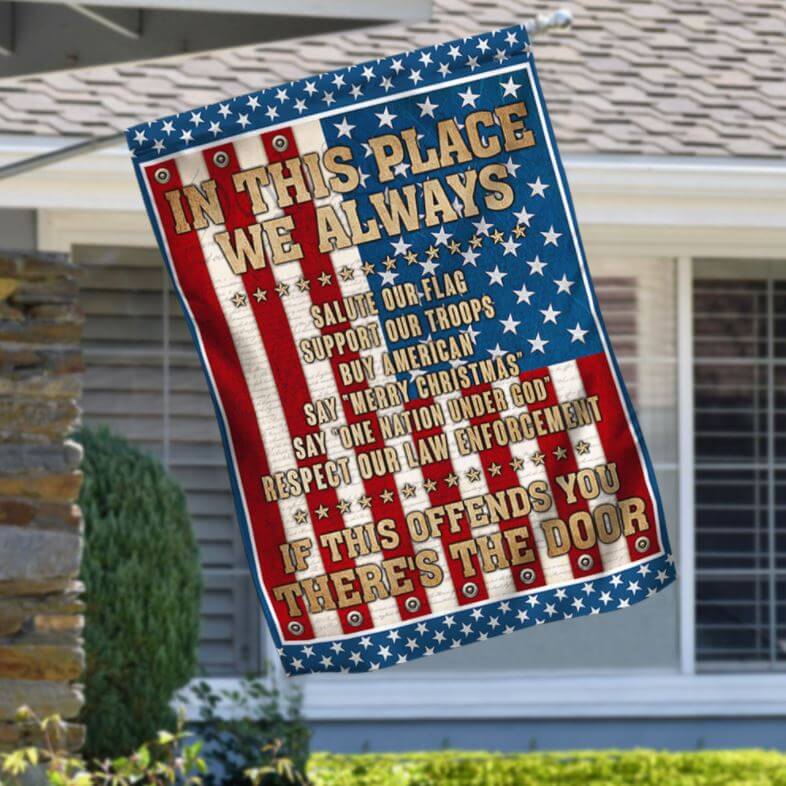 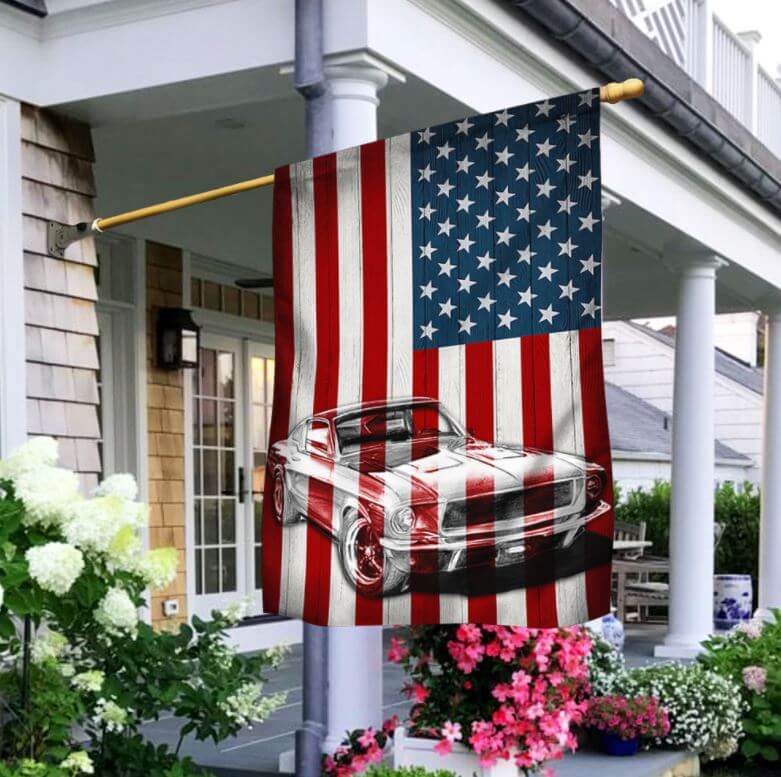 How To Display A State Flag On A Wall

Hanging a state flag on the wall requires a keen eye. Most of the state flags of the U.S. are displayed horizontally. The simple reason is that the image on each state symbolism is designed in a horizontal layout. A few state banners won’t look odd if you display them vertically, though, it still doesn’t match the way it’s popularly represented by the citizens.

For instance, the New Mexico flag is designed with a fairly basic image indicated on it. This icon, as you might think, could be rotated to any side. It means it could be displayed whether vertically or horizontally without looking weird. 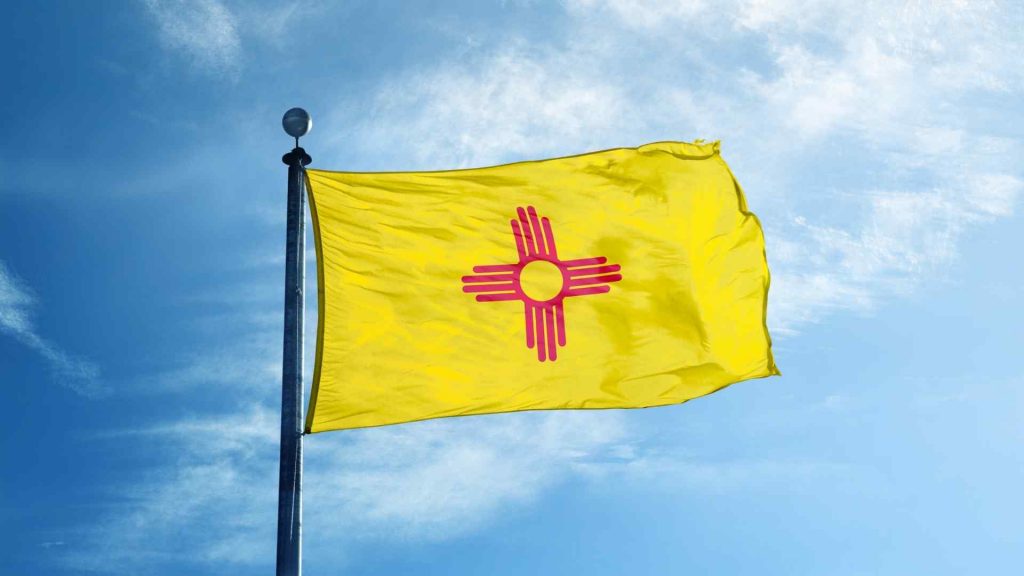 The California flag is different. You can only hang it horizontally to show the Bear walking to its own right and not skyward. Also, the horizontal flag hanging keeps the words completely legible. 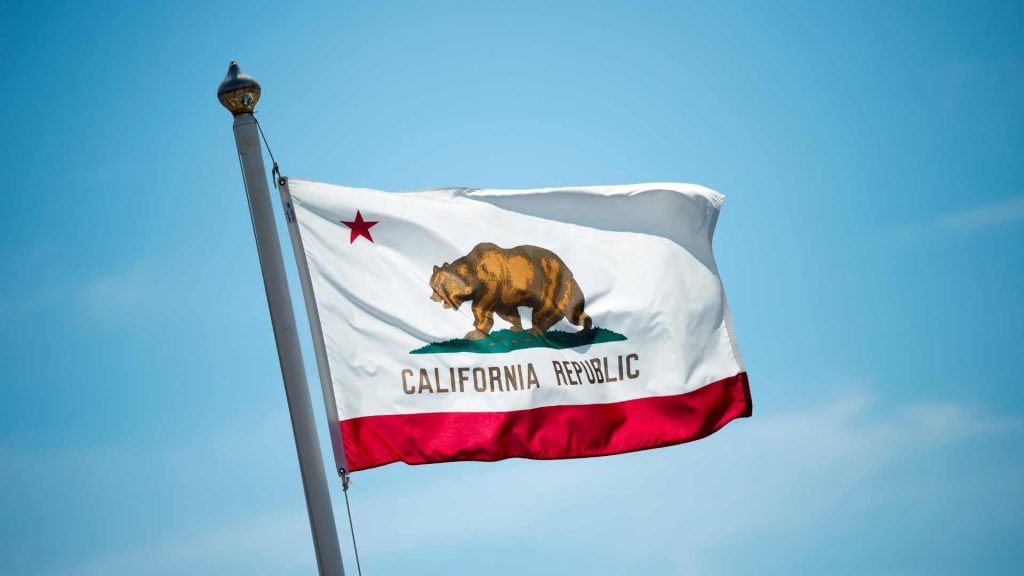 Easy Ways To Hang Nautical Flags On A Wall

Nautical flags and pennants are a fun addition to your beach house decoration. They’ll also brighten up a child’s room with white sailing decor and touches of a color that picks up a shade in the flags. 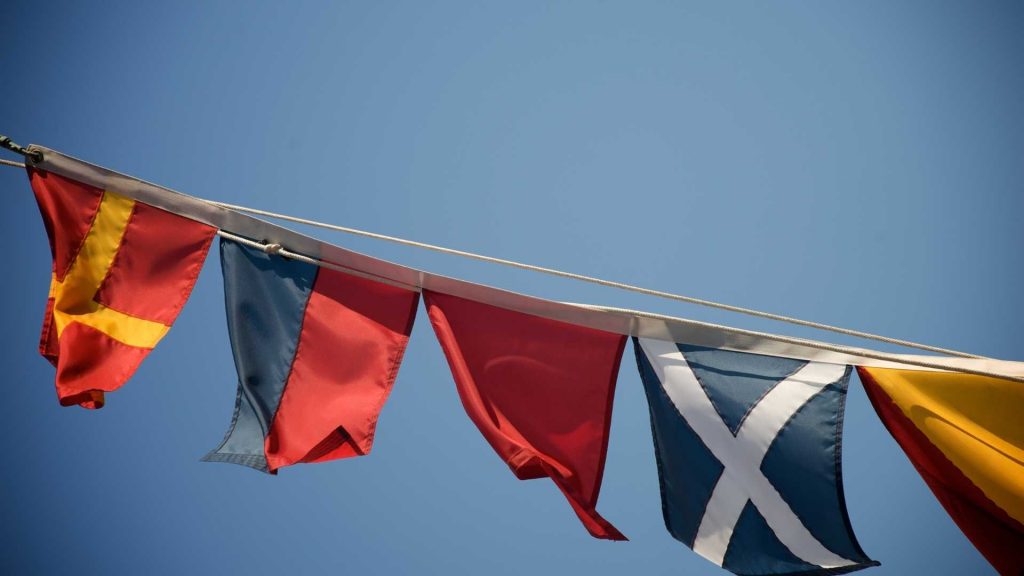 Tips For Displaying The Souvenir Flags On A Wall

Souvenir flags can be nicely displayed on the wall by adhering them to a frame or thumb-tacked to a wall or a cork board. The most conventional method is to adhere different souvenir flags to a slender rope and hang it as a lazy curve.

First, remove all the sticks attached to the it. Use glue to stick them vertically to a thin rope. Overall will look amazing if you position these flags to close together with no space in between. Once you’ve finished and hung them on the wall in a naturally lowered curve by gravity, the flags will separate on their own at the bottom. Next, pierce two nails on the wall. The distance between them is guaranteed to a reasonably shorter than the length of the rope. Tie both ends of the rope to the nails. 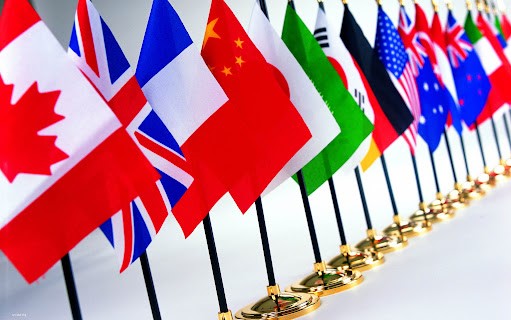 Another way for displaying the souvenir flags on the wall is to using thumbtacks. Here are some little tips for you if you want to know how to display a souvenir flag.